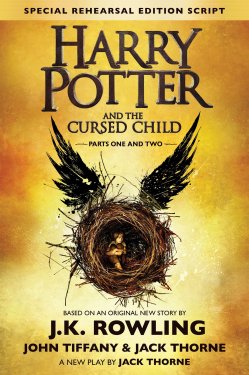 It was always difficult being Harry Potter and it isn’t much easier now that he is an overworked employee of the Ministry of Magic, a husband and father of three school-age children.
While Harry grapples with a past that refuses to stay where it belongs, his youngest son Albus must struggle with the weight of a family legacy he never wanted. As past and present fuse ominously, both father and son learn the uncomfortable truth: sometimes, darkness comes from unexpected places.

and welcome to my review of the most anticipated Harry Potter and the Cursed Child, the script of the play that recounts the story 19 years after the war against Voldemort. Much has been said about this book, some good and some bad. I went into it having no expectations, and having read many plays before, I was not thrown off by the style. anyway, I gave it 4/5 and not 3/5 because the feels were there, and because I enjoyed diving once again in the most beautiful magical world of all.

These are my spoiler-free thoughts. Being a fairly short read, and being plot-driven, I cannot say much more without spoiling it all. So please read it and let me know what you thought about it.

**SPOILER ALERT** – Do not read further if you do not want to be spoiled!

One thing I cannot agree with, the line where Harry tells Albus he wishes he was not his son. I understand it was said in a moment of rage, but I did not recognize Harry in these words; instead, I felt like it was a 15-year old Harry, angry with the world, isolated and misunderstood. It did not sound right, especially coming from him, who is a sensitive person and has suffered so much because of his loveless childhood. I did not and won’t agree with the main motive that makes the time-changing part of the plot start.

On the other hand, I really liked Hermione, who is always herself, as well as Scorpius, who is a sweet and intelligent child. I still do not know how to feel about Delphi: is it really true that Voldemort had her with Bellatrix? I knew she was sickly in love with him, but at the same time, did Voldemort want to have a child? And where was she during the Battle of Hogwarts? There are too questions unanswered.

I love books and traveling. View all posts by kekysliteraryworld