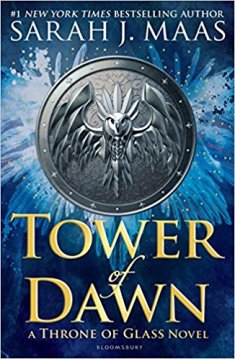 Chaol Westfall has always defined himself by his unwavering loyalty, his strength, and his position as the Captain of the Guard. But all of that has changed since the glass castle shattered, since his men were slaughtered, since the King of Adarlan spared him from a killing blow, but left his body broken.
His only shot at recovery lies with the legendary healers of the Torre Cesme in Antica—the stronghold of the southern continent’s mighty empire. And with war looming over Dorian and Aelin back home, their survival might lie with Chaol and Nesryn convincing its rulers to ally with them.
But what they discover in Antica will change them both—and be more vital to saving Erilea than they could have imagined.

welcome to my review of Tower of Dawn, by Sarah J Maas. Before you continue on reading, be aware that this is the review of the sixth book in a series, and even though the first part of this post will not spoil content of the book itself, it will spoil content for the previous books in the series.

At first, I was very reluctant to pick this book up. In Queen of Shadows I had really disliked Chaol and did not really care for Nesryn. When I saw that Sarah published an almost 700-page novel on the two of them, I seriously thought about not reading it. However, I soon learned that I had to read the book in order to continue with the next and final installment in the series. And here we are, a year after the publication of Tower of Dawn and I powered through. I definitely do not regret reading it, and I have to admit that it did surprise me in a positive way. I gave it 3.5/5 stars, and here are my thoughts.

These are all my non spoilery thoughts about this novel. If you have read it, feel free to keep on reading into the spoilery section, where I discuss a few things more. Let me know in the comments what you thought of this book.

**SPOILER-ALERT** SECTION – Do not read further if you don’t want to be spoiled.

I do not even know where to start. Maeve being the Valg queen is… yeah, I mean I see it. However, why did we learn it only now? It seems very strange that in a thousand years the people of the Southern Continent were completely oblivious to it, isn’t it? Especially if the spiders (which by the way, recalled Shelob A LOT) disappeared for periods at a time. Especially the ruins in the Oasis were not realistic at all. How could the royal family not see them? This is just poor planning and superficial world building in my opinion. Which explains why the princess Valg thing is revealed to be such a big deal when if I think about it, it is kind of obvious that that’s the case.

On the other hand, I liked the fact that the healers of the Torre can ‘cure’ humans infested by the Valg. That is a very cool idea, and one that made total sense in the end.

However. Let’s talk relationships. Why, WHY does everyone have to be paired up Sarah? Why?? And really?? Yrene and Chaol MARRIED??? I really did not like that. I like the Nesryn and Sartaq pairing but not Chaol and Yrene. I mean, they met what, three months ago? And they’re married.. It is so unrealistic and cringy to me, especially now that he calls her Yrene Westfall. I am again taking your husband’s name in the first place (it is not common in Europe, and I think it is a bit anachronistic overall), but she has a last name that speaks of her ancestry and power – why change it? Anyway, I am curious to see what will happen in the next book for sure.

I love books and traveling. View all posts by kekysliteraryworld

One thought on “Review: Tower of Dawn, by Sarah J. Maas”